So, how do you spell doughnut – donut or doughnut? Time Magazine actually wrote an article on this topic. Can you believe it? Such is the controversy! I say who cares how you spell it, it’s all about how the doughnut/donut tastes. Which type of doughnut do you prefer? Yeast, cake or old fashioned? So many choices! I favor cake and old fashioned, but that’s not to say I would ever turn down a yeast doughnut.

For over eight years, I’ve been on the hunt for a good gluten-free doughnut recipe, but the gluten-free doughnut recipe is very elusive and has escaped me at every turn. I’m, just now, finally beginning to think that it’s mythical. So I was very excited to receive a request to test Delightful Adventures Old fashioned Cake Doughnut Mini-Muffins. What can be better that a doughnut muffin combination? 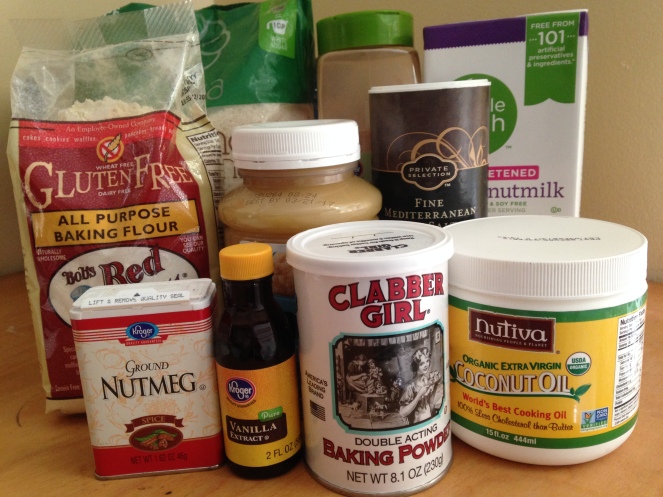 I had all the ingredients, except, the Bob’s Red Mill Gluten-Free All Purpose Flour that was suggested in the recipe. I’ve used Bob’s Red Mill Gluten-Free All Purpose Flour many times in the past, but have always found that it leaves me with an after taste that I just can’t put my finger on. So, now I use, mostly, Gluten Free Mama’s Flour Blends in my personal baking.

I followed the recipe and whisked  (I love whisking…the whisk is like a cook’s magical wand) all the dry ingredients together in one bowl and then mixed the wet ingredients together in another bowl. I poured the wet ingredients into the dry as instructed. Then mixed well to combine. I did this with a hand mixer as directions were not forth coming how this should be done. The batter was very thick and it wasn’t clear, from the directions, if the batter should have turned out this way. I proceeded to fill the mini-muffin tin. I had some batter leftover so I prepared a stoneware custard cup for the additional batter. 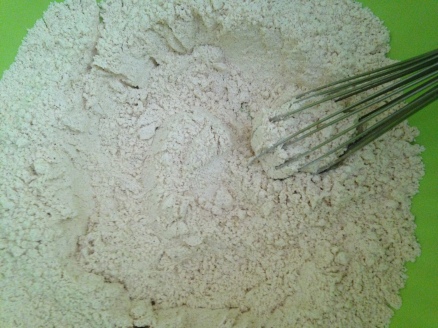 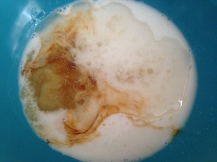 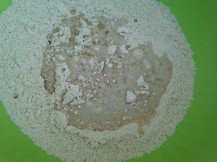 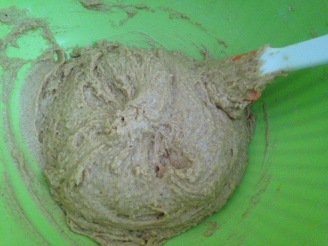 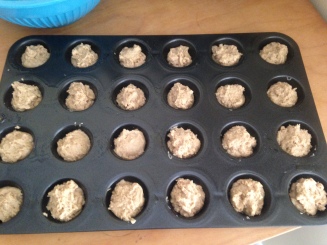 And into the pre-heated 375 degree oven they went. I peeked at them once through the oven window. The doughnut mini-muffins seemed to be raising quite nicely and they smelled good. Had I found the elusive recipe?

While the doughnut mini-muffins cooked, I whipped up the cinnamon sugar topping. I just love the aroma of cinnamon and sugar. For me it brings back so many good memories of baking with Mom. But this one memory, in particular, was of making doughnut holes. My job was to dredge the doughnut through the cinnamon sugar. At age seven, I took this responsibility very seriously.

Once the timer went off, I removed the Old Fashioned Cake Doughnut Mini-muffins from the oven and, as instructed, placed them on the rack to cool for 10 minutes. The custard cup still needed a bit more time in the oven.

Following the directions I dipped one muffin in the oil and made sure it was properly coated and then dipped that same muffin into the cinnamon sugar mix. I was having a bad time of it. My mini-muffins, as evidenced in the image blow, did not look like the ones pictured in the original recipe. I think it might be easier, if just for me, to use a pastry brush to coat the muffins and then to sprinkle with the cinnamon sugar mixture over top. You might have better luck. 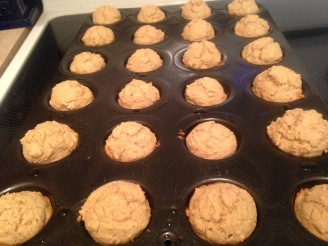 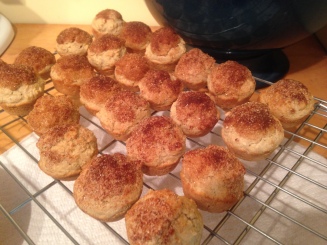 On to the results…

A for availability. Most grocery chains carry Bob’s Red Mill Gluten-Free All purpose Flour and the other ingredients needed to make this recipe.

B for cost. I paid $4.25 for the 22 ounces flour. Yes, I realize you can get it online cheaper. I noticed Bob’s is selling it for $3.75. Anyway, I find that most gluten-free flours cost a bit to quite a bit more than traditional wheat flours. I’ve been GF for over 8 years so I know the reality, just passing it on to others who might be new. The other ingredients in the recipe are competitively priced.

B for direction. While the direction were very precise, they lacked guidance. Should I mix the batter by hand or with a mixer? Should the batter be this thick? If I were a novice baker I might have felt a little lost.

B for taste. Once again, I found seven volunteer taste testers. I took myself out of the equation this time because of my flour bias. And, just so you know, I did not share my bias with any of the testers. While folks enjoyed the overall taste of the recipe and thought it had the correct mix of spices, “I really liked the richness of the muffin, just the right amount of cinnamon.” Four testers thought the recipe was dense and dry. One commented, “They are delicious, I would just like them moister.” Two folks commented on the smell. “Smells like breakfast, love the cinnamon.”

One taste tester recommended adding bits of apples or blueberries to add some moisture.

Sadly, I did not find that elusive doughnut recipe, but I’m still on the hunt.